by Anti-Scammer | Love and Dating Scams 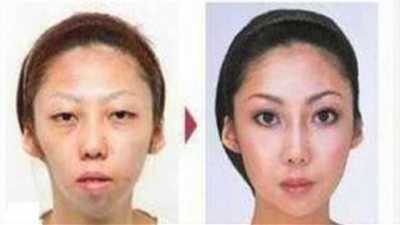 This story was widely reported, but according to the chinese, it is not completely true. The original story that is spreading on the internet is summarized below:

A northern China man (Jian Feng, not his real name) sues his wife for giving birth to an ugly baby. The man was happy with the wife until the baby girl was born, when he became suspicious and decided to dig further. He found out that her wife had in fact went through plastic surgery (see above). In court, the wife admitted to spending 62,000 GBP (626,000 RMB) for the surgery in Korea before meeting the husband, and she did not tell him about it. So what happened next? The guy wins the court case. The court ruled that the wife had cheated and she was asked to pay 750,800 RMB in compensation.

When the baby was born, the husband was shocked to find that she looked so different and suspected that the baby was not his. The baby’s complexion was so dark and different from him or the wife. Jian Feng quarreled with the wife and threatened a divorce if she does not admit to the extra-marital affairs. That is when she decided to take out the old photos to show him that the reason behind the baby’s looks. Well, that didn’t save the marriage but cost her more money instead.

The news was uncovered after readers found several reports in US websites. So, some of them decided to dig the news further and uncovered the original legal case at the police station, dating back to 2004. There was such a legal case but there was no report that the argument has anything to do with cosmetic surgery.

It remains a myth whether who is telling the truth. However, we hope the baby is fine!

There seemed to be many of websites that simply copy and spread the news without validating the truth.